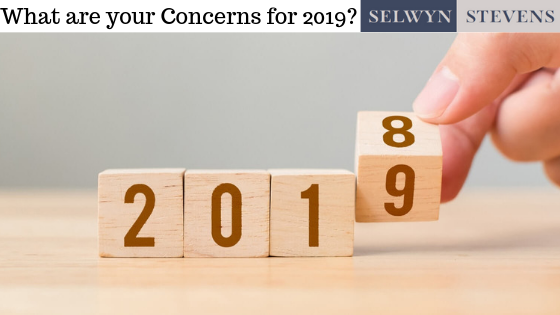 A new global survey reveals that CEOs view a recession as their biggest external concern for 2019. They cited attracting and retaining talent as their top internal concern.

Conducted each year by The Conference Board, the findings from C-Suite Challenge 2019™ also show that CEOs feel particularly uneasy about issues including global political instability, leader development, and trade. The report is based on a survey of over 800 CEOs and over 600 other C-Suite executives, primarily from the United States, Asia, and Europe. Participants weighed in on the top business challenges facing their organizations in both the year ahead and well into the future, and their strategies for meeting those challenges.

The survey asked both CEOs and other C-Suite executives about their external concerns for 2019.

The survey also asked both CEOs and other C-Suite executives about their internal concerns for 2019. Key findings include:

“While CEOs are quite anxious about the external challenges the global economy poses to their businesses right now, the survey results suggest they’re aware of the need to stay focused on the longer-term disruptive forces impacting their future go-to-market plans,” said Bart van Ark, Ph.D., a report author and Chief Economist of The Conference Board. “That awareness reinforces the need to continue the development of new business models, a strategy that will be tempting to neglect if and when the economy starts slowing.”

“As global competition increases while the pool of available workers decreases, it comes as no surprise that executives cited talent as a top issue in 2019 that’s keeping them up at night,” said Rebecca Ray, Ph.D., a report author and the Executive Vice President of Human Capital at The Conference Board. “Moreover, they think talent shortages will only intensify beyond 2019, which underscores why organizations should constantly re-examine how they’re attracting and retaining their best and brightest.”

The Organisation of the Future: How CEOs Plan on Succeeding in 2025

In addition to gauging concerns for 2019, the survey also asked CEOs and other C-Suite executives about what they think the organization of the future will look like and how they plan on succeeding. Key findings include:

“CEOs sense fundamental changes coming in the expectations and preferences of future customers,” said Chuck Mitchell, Executive Director of Knowledge, Content, and Quality at The Conference Board and an author of the report. “They see the importance of moving from a product-central approach to servitisation to enhance the customer experience. This approach turns customers involved in one-time transactions into ‘users’ who seek continuous interaction with the firms they deal with. But that bar is high since they are now competing with the best experience a consumer has had with any company, regardless of product or service. It widens the field of competitors in unexpected ways.”

CEOs globally see more regulation on the horizon, but less so among America’s CEOs

Work redefined: The challenge of valuing and rewarding work done in teams

When it comes to investing in leaders of the future, CEOs believe that “broader is better”